Yesterday at 5:21 pm by barrowmackem

Yesterday at 8:59 am by cyprussyd

Yesterday at 1:34 am by Gordon Armstrong

» Who wants to be a millionaire ? 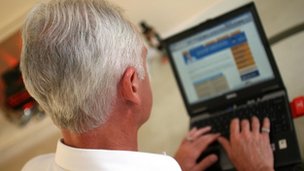 There is a "concerning" north-south divide in the number of over-65s in England, so-called silver surfers, who use the internet, a charity has said.

Age UK said Surrey's older people were more than twice as likely to have web access as those in Tyne and Wear.

The charity also said poorer people, those living alone and those in relatively poor health were least likely to access internet services.

The charity analysed responses, which are collected annually, from more than 5,000 people aged 65 and over in England.

David Mortimer, of Age UK, said: "It is concerning that in some parts of the country, more than twice as many older people are able to access the benefits of being online than in other areas, particularly as there appears to be a north-south divide."
ITea and Biscuits

The charity found four counties in England where more than half of over-65s use the internet - Surrey, Suffolk, Buckinghamshire and Bedfordshire.
Continue reading the main story
Over-65s using the web

Surrey had the highest proportion with 63%, while Tyne and Wear had the lowest with less than 28%.

Age UK has called on the government, councils and businesses to help get more older people online.

"More services from the private and public sectors are moving online in a bid to make significant cost savings," Mr Mortimer said.

"However, if they want older people to use these services, they need to help them get online in the first place with tailored and ongoing support."

Age UK's ITea and Biscuits Week, which started on Monday, offers older people who have not used technology such as the internet and smartphones the chance to try them.