Today at 2:40 am by oxfordshire

Today at 2:38 am by oxfordshire

Paul Gascoigne arrested over 'drunken attack on ex-wife and security guard'
5 Jul 2013 23:22
He is accused of arriving at a train station boozed-up, grabbing the guard by the throat and turning on Sheryl as she intervened


Paul Gascoigne has been arrested over an alleged drunken attack on ex-wife Sheryl and a security guard at a train station.
The 46-year-old football legend is accused of grabbing the guard by the throat and turning on Sheryl, 47, as she intervened.
[url=http://www.mirror.co.uk/all-about/paul gascoigne]Gazza[/url] was held overnight in a cell for 12 hours and bailed today after yesterday’s alleged assault at Stevenage, Hertfordshire.
Just weeks ago he was pictured smiling and happy with Sheryl as pals believed he had come through the dark days of his latest battle with the booze.
But today it appeared he had slipped back into his old ways as he emerged from a police cell after his arrest for an alleged drunken attack.
The troubled former England star was held on suspicion of common assault and being drunk and disorderly – months after checking out of rehab in the US paid for by his friends.
Witnesses told police alcoholic Gazza arrived at Stevenage train station in Hertfordshire last night boozed-up and shouting abuse.
When a security guard confronted the former Newcastle, Spurs and Lazio midfielder, he allegedly lunged at him and grabbed him by the throat.
It is understood mum-of-three Sheryl arrived moments later and tried to step in but Gazza grabbed her arm, it is claimed.
Police were quickly on the scene and he was hauled off to Stevenage police station at around 10.30pm.
I’m a Celebrity... star Sheryl, who has campaigned for victims of domestic violence following her own experience during her turbulent marriage, refused to discuss the allegation tonight.
She said at her home near Hemel Hempstead, Hertfordshire: “I have no comment to make.”
But a police spokesman said: “There are two allegations of common assault. One was against a man who is a station security guard.
“The allegation there is the 46-year-old man grabbed the security guard around the neck and the other allegation is regarding a member of the public who arrived at the station while this was happening.
"The accusation is that he grabbed their arm.”
British Transport Police added: “Police were called to Stevenage rail station around 10.30pm on Thursday following a report of a man being drunk and disorderly.
“He was subsequently arrested and taken into police custody. He was bailed to return, pending police enquiries."

Recovering: Gazza with Regan and Bianca in March after rehab
Twitter

It was a far cry from the day Gazza was pictured looking relaxed and grinning alongside smiling Sheryl, their son Regan and her daughter Bianca at Windsor races in May.
And friends believed he was turning his life around after having treatment at a specialist clinic in Arizona.
Staff there feared he would die as he battled alcohol withdrawal symptoms and he has described terrifying near-death experiences where he thought he would not recover.
The £6,000-a-week bill for treatment was footed by celebrity friends including fellow footballer Gary Lineker and Radio 2 breakfast show presenter Chris Evans, who had hoped his troubled past was behind him for good.
Gazza last month took part in a comeback tour where hundreds of supportive fans wished him well as he gave talks about his life.
In April, Gazza’s Bianca, 26, insisted the star was on “top form”, and said: “He’s off the booze for good.”
He appeared on the Alan Carr chat show in the same month, thanking stars for funding his rehab treatment.
However, he warned he may not be able to give up drinking forever.
He said: “I never say never. I might drink in the future.”

And after the alleged station attack, it seems his alcohol addiction has once again spiralled out of control.
The assault he is accused of happened nearly 30 miles from Sheryl’s home.
The Mirror broke the news of Gazza’s arrest to his dad John tonight.
Speaking at his home in Gateshead – where the former player stays whenever he is visiting the North East – John appeared shocked at first but then gave a resigned shrug.
He said: “Oh no, he hasn’t has he? I haven’t spoken to him. I haven’t got a clue.”
Asked if he thought Gazza might now return to the area for support, John – who lives in the same street as the star’s sister Lyndsey – added: “I just don’t have a clue where he’ll go.
“None of us up here knew. None of us have heard from him.”
Gazza married Sheryl in 1996, six years after they met. But she divorced him in 1998 due to his alcoholism and violence.
Sheryl is mum to his boy Regan, 17. She already had Bianca and son Mason who Gascoigne adopted. 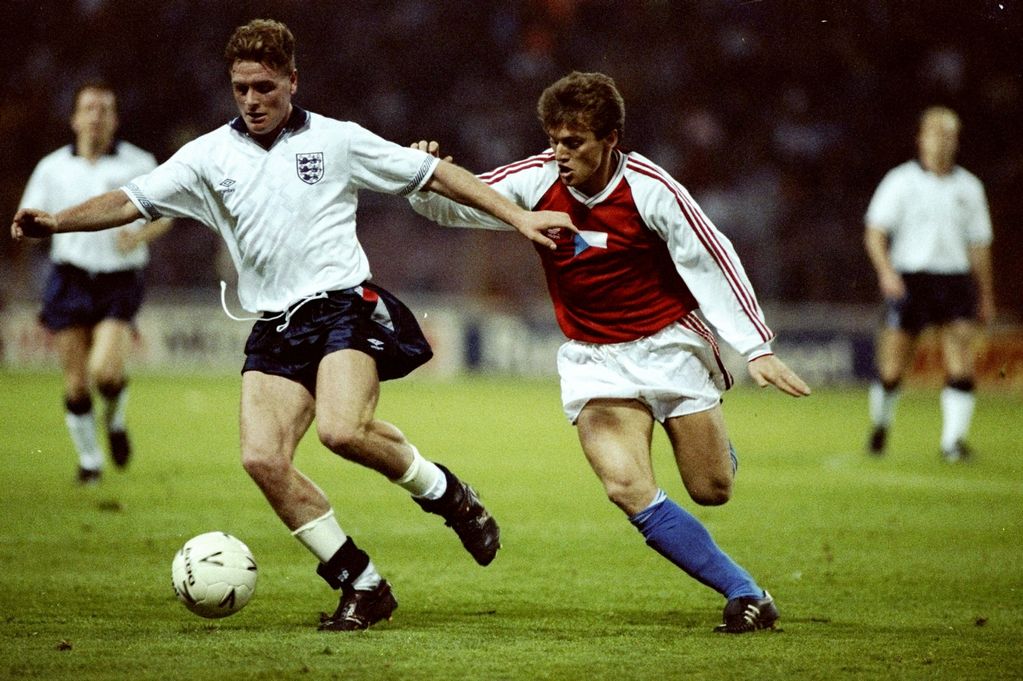 It's a crying shame what drink can do....

I love a drink, and quite heavily, but and a big but, I dont have any associated demons. I also smoke, but drugs are A  NO NO, I feel sorry for the lad, A fantastic talent. The best ever goal for england, Skill wise, Was against Scotland, when he chipped it over Hendrys head, and the very next touch, the ball was in the net. ALL my jock mates, and there are a lot, Say its the most horrible goal scoared against Scotland. But the most technically good.....Talent not wasted, the same as Georgie Best, just the build up of demons. sometimes no matter how strong a man is, he has no control over his own personal demons. And help is only as good as your mental status can handle.

Unfortunately the London celebrity scene did for Gazza. Bloody Venables gave him too much leeway and that started the process that continued at Rangers unchecked.