Today at 4:01 am by Gordon Armstrong

» I know many people wouldn’t

» what do you think? 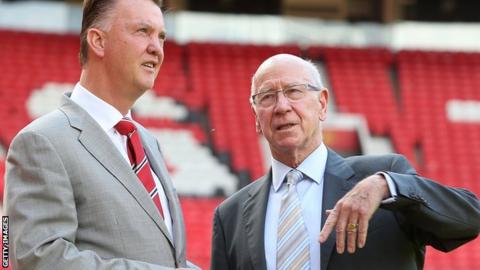 [size=11]Sir Bobby was England's record goalscorer until United captain Wayne Rooney passed him against Switzerland in September 2015.
Manchester United are to rename Old Trafford's South Stand in honour of their record goalscorer Sir Bobby Charlton.
Club director Charlton, 78, joined United in 1953 and made 758 appearances, scoring 249 goals.
He said the renaming, which will take place before the game against Everton on 2 April, was a "great honour".
"Bobby is quite simply, the most iconic figure in English football history," said United vice-chairman Ed Woodward.
"A player, a diplomat, a gentleman and a tireless worker for charity, he represents everything that is good about football and Manchester United."
Charlton, a member of the England team which won the 1966 World Cup, won four league titles with United and the 1968 European Cup.
The retired midfielder was one of the survivors of the Munich air disaster, which killed eight of his team-mates in 1958.
Charlton added: "Manchester United has been such an important part of my life and I have so many wonderful memories of this Theatre of Dreams."
The South Stand, which contains the only remaining part of the original 1910 stadium infrastructure, houses the directors' box.[/size]

Nice move by the club, albeit a bit late IMO. Sir Bobby belongs to English football as well as ManU because of his 1966 exploits and the truly gentlemanly way he approached the game and people.

I remember when they did a" This is Your Life" on him and brother Jack said he would never make a manager as he cared about people over much. This proved to be the case at PNE where he quietly gave up rather than ruthlessly drop people. George Best called him a miserable man, but I have always regarded him as someone who truly made the game memorable along with Beckenbaur, Pele, Eusebio etc.