Yesterday at 1:21 pm by cyprussyd

Yesterday at 12:52 pm by Hieronymus 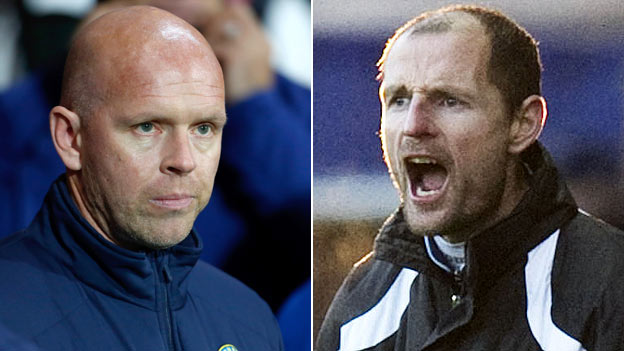 Kilmarnock interview Henning Berg and Allan Johnston
By Paul Barnes BBC Scotland
Comments (11)
Former Blackburn Rovers boss Henning Berg and Queen of the South's Allan Johnston have been interviewed by Kilmarnock for the manager's vacancy.
The news came as assistant Jimmy Nicholl ruled himself out of the running by taking up a coaching job with top-flight rivals Hibernian.
Kilmarnock chairman Michael Johnston stressed that he had still to speak to other candidates.
But he confirmed he had held talks with both Berg and Johnston.
The Kilmarnock chairman has also spoken to Queens, who his namesake led to the Division Two title this season, and says the compensation required for the former Killie midfielder would not be an obstacle.
"I haven't agreed a compensation figure with Queen of the South, but I have a fair idea of what it would be, and it's certainly within our budget," the Killie chairman told BBC Scotland.
Former Scotland international Johnston, who also played for Hearts, Rennes, Sunderland, Birmingham, Bolton Rangers, Middlesbrough, Sheffield Wednesday and St Mirren, spent five years at Rugby Park as a player.
The 39-year-old beat Celtic's Neil Lennon, Inverness Caledonian Thistle's Terry Butcher and Motherwell's Stuart McCall to PFA Scotland's manager of the year award after winning the title and the Ramsdens Cup in his first season as a team boss.
Berg has experience in Scotland after spending the last season of his playing career with Rangers, having previously played for Valerenga, Lillestrom, Blackburn and Manchester United.
The 43-year-old former Norway international had spells in management with Lyn and Lillestrom before an ill-fated 57 days back at Ewood Park.
"I spent a few hours with Henning at the club yesterday [Friday]," explained Johnston. "We showed him our facilities and discussed the current first team squad, and the budget he would be operating with if he were to become our new manager."
Former Kilmarnock striker Jim McIntyre, who had a spell as manager of Dunfermline Athletic, and former Hearts and Lithuania manager Csaba Laszlo have been quoted as saying they are also interested in the vacancy at Rugby Park.
Speculation has also linked former Chelsea defender Albert Ferrer, who has managed Vitesse, and former Liverpool, Valencia and Benfica assistant Pako Ayestaran with the role.

He was a good player for a while, but wanted to play for Rangers more.