[You must be registered and logged in to see this image.]

Consectatio Excellentiae - In pursuit of excellence.
Sunderland AFC's crest was unveiled in July 1997, to coincide with the opening of the Stadium of Light.

The club wanted to ensure that the distinctive crest paid tribute to the club's loyal supporters by including images from across the region.

The crest includes a central shield which is divided into quarters, two of these featuring unmistakable regional landmarks.

The Wearmouth Bridge, featured in the bottom right of the shield, links the north and south of the city, while Penshaw Monument, in the top left, is a well-known landmark and is included to acknowledge the depth of support for the team outside the City boundaries.

Supporting either side of the crest are a pair of majestic lions which also feature on the City of Sunderland's coat of arms - a reference to the long tradition of mutual support between two great institutions.

A colliery wheel crowns the club crest in honour of the strong mining traditions of County Durham and acts as a reminder that the Stadium of Light lies on land once occupied by Wearmouth Colliery. 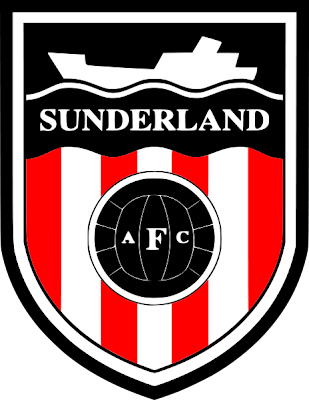 commachio wrote:I'm not overly struck on it, to be honest.....

This is my favourite. Would love to change back.

The new badge is shite imo.
It looks like it's been cobbled together by a bunch of college students on a pc.
Even the motto makes it a mockery.
I'm with Comm & tab paper.